This animation took me an hour and a half to do.. I’m really not used to it so everything takes forever

I think I want to work on putting rough drafts of animations now.

I’ve been really distracted all day from last night.. oh man, it was so hard to concentrate today @_@

I uploaded all of my source and assets to github, and I’m slowly working on making things presentable, rather than content-complete. I don’t want to share the url yet because everything’s ugly, but it’s up there if you’re dedicated enough to search for it (you aren’t, though)

That’s an animation of the main menu as it looks now. I went through all the textures and replaced the Japanese text with English, made the elements scroll in and fade one by one, and mouse-control for the main menu instead of arrow keys + Z key. I think I want everything to be controlled by the mouse eventually, but I’m not sure, I might keep shooting and focus binds on Z and shift.

I changed the project name to ‘midnight sun’ because it’s midnight, and uh.. fire is like the sun, I guess. I picked the name eternal sun because it sounded like a counterpart to imperishable night, and eternal day sounds dumb. Coincidentally I also think eternal sun sounds dumb too, so I caved in and just changed it to midnight.

I want to make the pause menu and state switching work perfectly too, eventually. Some funky problems crop up when I restart the game from the pause menu.

Most of today was really dedicated to homework for a CS class though, we had to make a simple XML editor. The existing libraries we were allowed to use made it pretty easy, though.

It’s a web app that scrapes course information from the school’s course catalog, then allows users to select courses and sections and see how they would fit together on a week-view calendar thing. It’s supposed to be a group project but it just so happens that the partners I picked to work with dropped the course, so I’m stuck doing all of it. It’s mostly PHP, I wanted to use Java but the school’s servers weren’t being very cooperative. I figured PHP shouldn’t be too hard to get a working grasp on and I should practice that instead anyway, so I rewrote everything from in PHP. It was actually a little fun, at least in retrospect. I’m sure I hated it when I was actually doing it. 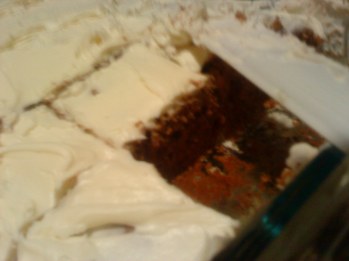 Oh, I made carrot cake today too. It was okay, but the icing is waaaaaaaaaay too sweet. I feel like my … I .. actually don’t know how to describe it. Your tongue burns when you eat spicy food, and your throat burns when you drink alcohol, but what happens when you eat something way too sugary? I was going to say ‘felt like my head was going to explode,’ but I just gave that a little thought, and I don’t think it makes much sense. My head feels perfectly intact.

I really love this sound, and Keiko’s voice. It’s deeper than my voice.

I just realized Helvetica isn’t on my computer, and it’s being sold for money. What? I always thought it was like Times New Roman.

I tried to finish stage 3 but I’m feeling pretty burnt out in terms of creativity, and my creativity levels weren’t very high in the first place. I just put filler patterns for stage 3-6 and all of stage 4, and I’m going to focus on sorting out the code and making it look more acceptable for a demo release / start an open source project on github / ask for help around MotK or something. 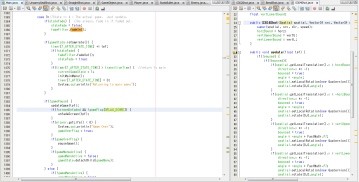 Everything has just gotten way too messy over the months. I tried to look back to sort out a problem with fading the screen in and out, and it looks like there’s at least 3 different ways I put in to fade the screen in.

There’s a lot of quick-fix stuff that I never got around to replacing either. The pause menu is, apparently, a geometry that’s set to hang in front of the camera. It must have been before I used the separate gui node. There’s also a lot of parts that are frame-rate dependent, and I have to go throughout the code searching for where those parts are and multiply them by the time-per-frame value. Then, I have to change all of the rates to reflect the fact that it’s being multiplied by, like, 0.001. What a mess…

One thing I’m pretty sure I’m not going to change is the way the game timeline works. There’s a current-time value that gets added to whenever a frame passes that isn’t during a pause, and when the timer hits certain values it calls whatever update method that needs to get called at that point, then trips a boolean flag so it skips that portion of the timeline from then on.

I don’t even want to think anymore, this is all just so terrible

[EDIT]
Whipped together a preliminary spell 3; enemy dashes towards the player and throws a spread of knives, cycle repeats and gets faster.

Doing gifs is convenient, but it sucks in a way because it has to be tiny and you can’t really see anything. This card is kind of fun to play, when Sakuya reaches top speed it boils down to moving in a large circle around the screen dodging the slow knives as fast as you can, all the while running away from the spread of knives. The spread widens and gets faster as the time per loop cycle goes down.

I like that sound in the second half. This is Yuki Kajiura’s music right? It doesn’t say in the video but I assumed so.
[/EDIT]

Worked on spell 2 enough that I feel ok with moving on to the third one, which will be the first one that will involve things I haven’t done in the other patterns yet. 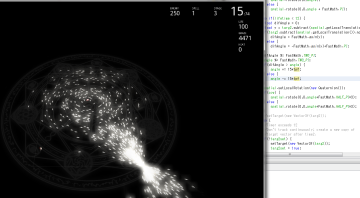 2nd one is just as I planned, knives spawn around and orbit, then stop to turn to the player, then close in on the player.

[edit]It’s kind of ugly how they immediately start moving at full speed right? I just changed it to accelerate slowly, but I’m not putting another gif up. Just imagine it happening[/edit]

You can’t really see the knives wavering as they face the player in either the still screenshot or the tiny gif.. but yeah, they waver around and track you until they start moving again.

I made some chicken stuffed with spinach today
I used a bunch of garlic, Tuscany peppers, Monterey Jack and parmesan cheese, and spinach, threw it in a blender, then took chicken breasts, cut slits into them, coated them in egg, flour, bread crumbs, parsley, and black pepper, put the spinach mix into the chicken breasts, fried them all till they were brown, then baked them for 11 minutes on 350. I’m not really sure baking was a good idea.. maybe I should have covered it while baking or just not bake it at all. It wasn’t dry, but I felt like it could be more moist.

Then I just put some in the middle

Then I cooked it

After or before baking? I forgot

It’s kind of a hassle to make though

Looks like stage 1 spell 5, but the rest of the patterns are really different so I think I can afford one repeat.

I should find a way to force the hour hand and minute hand to be on either side of the player from the start.

Here’s another animation. I’ll try to keep them small from now on, no more 20MB GIFs.

I’m so glad I don’t have to deal with fading dolls in and out anymore. What a pain in the ass that was.

Working on putting Stage 3 together. I was about to say ‘Too lazy to scan that sheet’ but I decided just now that I’d scan it. I uh.. I put a plate on it, and the steam kind of ruined the sheet.

I saved it as JPG too without thinking, deal with it

1: Don’t really care. I’d like it to be circular and tick like a clock, though. I thought about making a pattern that looks like a clock face, with a second, minute, and hour hand rotating at different speeds. We’ll see.

2: Knives spawn around a large circle around Sakuya. After a bunch of them spawn, they all turn and aim at the player. I’ll make them move slowly to avoid it becoming unmanageable.

3: Sakuya throws a single knife towards the player, then dashes after it with an active hitbox in front of her to simulate a knife slash. Then after a short pause, a flurry of knives are thrown in a cone in front of her. Cycle repeats and gets faster with time.

4: 3 waves of bouncing knives while Sakuya chases the player.

5: 8 object knives are thrown in a circle, after a second or so Sakuya dashes around touching all of them and spawning 4 object knives on each of the 8 original ones; those expand for another half second, then Sakuya dashes around again, directing all of the knives back at the player with a bit of spread. Cycle repeats with Sakuya relocating right next to the player, again, gets faster.

6: Dashes in to stab,then dashes again to slash and throw a cone of knives forward. Afterwards, creates a field of knives in the direction of the player. 16 object knives are mixed in. After a few seconds Sakuya redirects the object knives toward the player, and immediately after, recycles the pattern with another dash.

I really want to make it seem like you’re fighting a humanoid and not just a spaceship shooting bullets in this stage. I think I’ll have to start using character animations in this one, or the patterns will look a bit silly. It takes me forever to animate things nicely though. I spend hours just to get something really rigid looking, then scrap all of it and start over.

I’m working on curving bullets, and I can curve them just fine.. but my understanding of inverse trig functions (beyond the definitions) has always been a bit shaky. I can’t seem to make them curve in the right direction; I’ll finish that crap tomorrow.

Not according to plan

WESTERN|ARC
Create a free website or blog at WordPress.com.