Dots pass by, and you tap on them
the pace increases as the slope gets steeper, and slower as it levels out

During that I’ll do LD in Javascript

Then I’ll work on AGDG bootcamp

I want to do that in JS + Canvas too, but I’ll need someone else to do the sprites
Hopefully I can find someone on the thread… cause I really don’t think I can do it myself

There’ll be two phases: First is you’ll be waiting near a speed trap on your motorcycle (motorcycle just so you can slip through traffic better, even though it probably doesnt make sense). There’ll be 3 lanes, and you click on the lane the speeder is in when it crosses a radar beam. When you find a speeder, you go to the next phase; you go down the highway and weave through traffic to catch up to the offender. You have to collect gas cans and whatnot on the way to keep up the chase.

When you complete these cycles.. idk. I guess you’ll just increase a counter for people apprehended and gain rank within the police, but the rank probably wont actually do anything.

Alright, so the gameplay boils down to this, it’s a lot less interesting than my first plans for the game but I was struck with thunderous amounts of apathy on this project, so what can I do.  At least I’m sure to be in time for AGDG bootcamp on the 21st.  Maybe I’ll change the title graphic a little bit, but no more.  It’s not even holding a basket, it’s still the rake…

Anyway, right so what you do is go back and forth from the rows of plants and the pile of plants on the ground.  You’re given a certain amount of pounds to bring back, and different plants weigh different amounts.  You need to be as close to the request amount as possible, if you’re under it before time runs out you fail, and if you’re too far over the requested amount you get no points.  So it’s like… a game about.. adding.  If you touch the bugs that are bumbling around in the middle, you drop any plants you’re holding which sucks for you.

I just realized the gameplay isn’t as clear so I should probably make an instructional image pop up right after the title screen.

I briefly fantasized about the idea of making a dark souls like game and played around in blender, but… yeah.  That’s not gonna happen soon.  Waaaaaayyyyyyyyyyyyyyyyy too much art involved.

I’m working on a small html5 multiplayer game with minimal graphics for more practice, maybe I’ll post about it later if I care enough

Whelp, there it is.

Pretty depressing cause I played a few flash games that felt far more entertaining, one of them being Super Hexagon.  I mean.. playthroughs don’t last very long, but it was still more exciting than this.  Maybe I should make the enemies actively chase you, just bumbling around randomly probably isn’t enough.

Uggghh, I hate this.

Alright, I tried it on my phone for the first time in a while, and the decals didn’t work at all.  As of now, it takes forever to load because of how I deal with animation frames, and I feel like the control scheme will be difficult to map out nicely on the phone.  So, I sat this morning and had to come up with another mediocre idea, after discarding a couple less than mediocre ideas.

You walk back and forth from the plant rows and a plant stash, and you have to pick plants and carry them to the stash.  You need to bring back a certain weight of crops in 30 seconds.  The weight requirements get higher as the game progresses, and enemies will increase in number as well.  If an enemy hits you on your way back to the stash as you are carrying a plant, you lose the plant and have to go back to the plant rows and get another plant.

Different plants will have different weights and will affect move speed, on some rounds certain vegetables will have a bonus

Goal is to bring the greatest weight of crops without failing a request.  When you hit the desired weight you will get a new request and the timer will reset.

Started putting it together.

This shows a bug being spawned, he eats a little of the carrots and pumpkins, then he gets swatted away.  I think I’ll change the bug hit reaction to just popping up like the eggs in easter run, and then falling into the ground.  The vegetables, grass/flowers, and effects are done with libgdx decals.  They were a bit of a pain figuring out because I never used them before but it’s all going fine now.  I’ve yet to test this on my phone, I have a feeling I’ll need to finally learn how to make a loading bar for this.

Getting the attack effect was kind of a chore as well, and I need to work on it a bit, but now from a graphical perspective.

Stuff to do:
-Get game cycle working (load, start, play, lose, replay)
-Plant regeneration and garden health assessment
-Fix spawning
-Android controls (I have no idea what I’m gonna do)

When I finish the base game I’ll start worrying about things to make it interesting, like big monsters that can knock you down.

You’ll have to defend the garden against waves of enemies.  The enemies will swarm the central garden, and the plants will grow smaller and smaller (representing them being eaten), and you have to hit them to kill them.  Your life will be measured in the garden’s remaining yield in crops.

Enemies will move slowly to give you a chance to move over to them and whack them.  They’ll come from the outer borders and when they reach the garden, they’ll just randomly wander around inside it, eating nearby plants.  Later, I’ll hopefully add enemies that flee from the player.

Unlocks I can think of are … more boots, a different weapon that’ll let you use the 3rd attack in the string, and maybe a different outfit, all of which I’ll just do with texture switches.

Every couple of waves, there’ll be a single large enemy that will take multiple hits to down.

Game’s over when the garden dies completely.  Veggies slowly regenerate if they’re not being attacked.  Just last as many waves as possible, get a hi score (again.  fun right? ehhh…)  It’s just that I feel like I spend way too much time on art assets when what this is really for is programming practice.  Lately it feels more like blender practice than Java though.

Right, back to ideas.  The game flow will probably go like this: Simple overlayed sprite for the intro screen, click to start.  The sprite should actually be different depending on what’s been unlocked.  That’s how Easter Run’s title was supposed to be but I got lazy and I hate drawing.  Then it’ll say something like Ready… Go!, and the spawns will begin, with you in the middle.  The wave number, time of wave, and plants remaining in % will be displayed across the top.  When you destroy all the enemies in a wave, the next wave begins immediately after.  Number of enemies spawned and number of enemies allowed on the map at any one time increase with wave number.  When you lose, you’ll just go into a lose animation and the text will show Lose! or something.  After that, your score will come up, and if you unlocked anything it’ll show, with touch to retry just like last time. 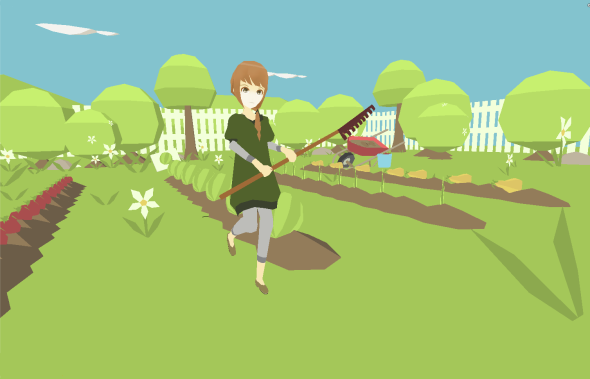