So I went to a practice SAT site and boy it was rough, embarrassingly enough

I had to stop and pull out notepad.exe on the second question and think for far too long than I’m willing to admit 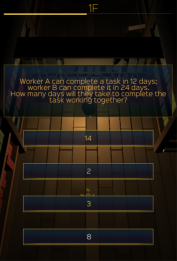 It was the ‘A worker does job in X days, B and A together do it in Y days, how long does B take doing it alone?’ type questions.

After doing it I tried to make a generator for those type of questions where all values involved were integers.  I couldn’t find a pattern though, so I just generated a table of all the values where the equation worked and all values were ints.  All the values under 30, that is.

Edit: I thought about it for again and realized that’s not the average at all.  What was I talking about??? Whatever math sucks

It’s been too long.  I got a 780 on math when I took it but now.. I might get less than 600 HEHEHE
I guess it’s a small preview for me of how older people typically become awful at math.  If you don’t use math for more than calculating tips for the waiter it really does go away.

Running into that got me a little more motivated on doing questions.  I think I’ll try to do a couple more SAT math type questions, and then call it quits and release for this one

I’ve got a terminal case of lazy

I know what I need to do and I write it down in my notebook every day but progress is just painful now.  I think it’s because what’s left, I don’t find interesting.  There’s finishing the end screen, which I made some progress today, maybe 50% of it, then doing the rest of the questions for generation.  I was thinking of putting questions from the periodic table, I don’t know what else…

You’re sliding down the ladder, the books, shelves, ladder all move up while you’re fluttering down.  It’s hard to tell without the animation and I’m not about to figure out motion blur

I tried to make a lobby floor but I decided against it because, mainly, I didn’t want to model the doors which I couldn’t get to look quite right and I decided against increasing the scope of the project.  It didn’t seem so hard to do though

It was a bit more involved than I had hoped; I think I might need a special math font or something for this…

I stored the names of the trig functions in an array, and store the identities as strings.  Any time the identity string names a trig function, I prefix the word with an ‘@’; so when making the wrong answers I just replace the correct trig function with a different function.  At first I thought I’d replace number values too, but I think I’ll just stick with this for now.  I planned on doing some common antiderivatives, derivatives, and finish with series sums stuff

But anyway, I hope you have this crap memorized I KNOW I DON’T 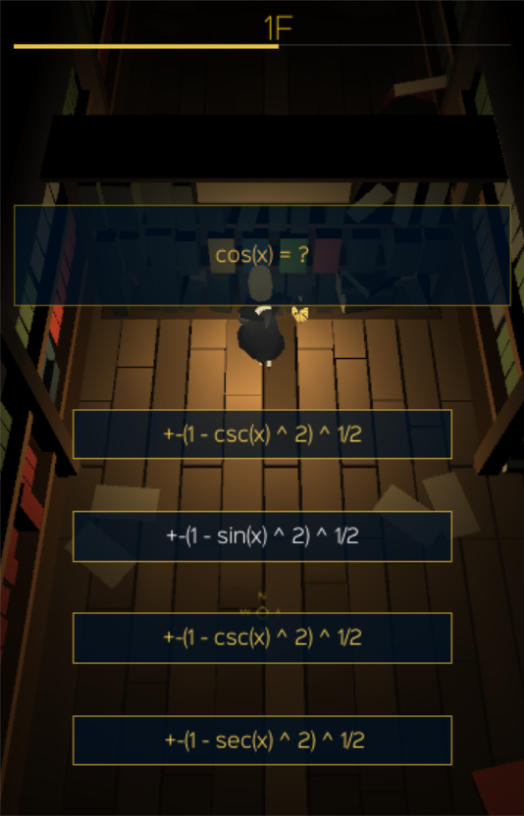 Allowed restarting from 2 levels back, instead of having to start over every time from the end screen

Dialog box now fades in and out

Fixed the touch vs mouse click movement bug; on android it was applying both on touch, making the player move super fast.  On android, touching is the same as mouse clicking it seems.  I should probably just use mouse handling all the time if that’s the case…

I should incorporate pre calc, calc I questions in the later floors tomorrow

just fixed both, it’s cause of

it should just be

Made the title screen a bit nicer looking, and the basic form of the end screen

Still stuff to do:

I don’t know, I don’t think I have much left to care about for this one.
MAYBE I can work on some space game… we’ll see

Made a simple generator for arithmetic questions in the format of a + b = ?

and the answers are just… within 30 of the real answer.  I’ll look into other question types later, I think it’s just aesthetics for now, and then I’ll go back to gameplay