It’s not always that hard either

Here’s a section of ground for the mountain path stage.

I want one with lots of red on a dirt path,
A waterfall,
A river,
a black gloomy forest,
a lot of stone stairs up a yellow/green path, with those shrine gates

Looking forward to actually using the alpha channel
Why did I never do that before??
The scene is basically a vegetation brush from Gimp stamped everywhere, over and over 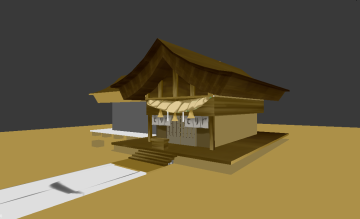 I feel like I spend most posts just complaining, which probably isn’t very fun to read
I guess I’m getting…….. somewhere?  Still a long way to go.  I’m trying to spend more effort into texturing instead of monochrome-ing everything.

You know what doesn’t suck? This song

Well, I got all Mac’d up to release on iOS but Unity can’t (I think) build for 64 bit and I need to, so that won’t happen until January

At first I wanted to make something multiplayer, but now that I’ve had a bit of trouble animating (Character animation just kills me, and not just assigning keyframes.  Cloth, blending, etc.) I kind of want to take a step back and just do the last project, but better.

In fact, I think that’s exactly what I’ll do

It’s just weird thinking, at what point do you think, ‘you’re shit at this, keep making shit until you’re good’, or ‘you’ve practiced enough, time to really push the limit’?

I suspect the really special people will push their limits much earlier, but I think I’m not one of those

Have I mentioned releasing on iOS is a monumental challenge compared to releasing on Android?  Of course I havent, because it’s the first time I’ve tried.  It’s “absolute bollocks”

Been watching a lot of Ricky Gervais and Karl Pilkington, specifically in Idiot Abroad but also other works.