That bad deals are very easily to get.

That really shouldn’t have been a lesson I learned so late, but I was reminded of it today.  On a whim, I logged in to my AT&T account.  Well, not entirely on a whim.  I’ve been long considering switching cell phone service provider because I’ve been paying what I’ve felt to be far too much for what I’m asking.  For the past 3 years, I’ve paid 2$ shy of 100$ a month for 450 minutes, 120? texts, and 3GB of data.  For the longest time I’ve thought… surely I’m doing something wrong.  It turns out that yes, I have been doing something wrong.

The site suggested I switched from my plan to another plan that has unlimited minutes, unlimited texts, and 3GB of data, for 60$ monthly.  I didn’t see any drawbacks, so I just went with it this morning.  When I first signed up I kind of glossed over the options and selected the lowest I could manage with, not really assessing what I was reading (as I’m wont to do).  I suppose I, again, have not given a proper appraisal on the new plan I’ve just now gotten myself into, but what I do know is it helps my bottom line, and for the time being that’s good enough.

My reasoning is, or rather, WAS, that plenty of other people go through this process, and if a plan that makes no fiscal sense were available it would be promptly removed after some complaints.  What I want to think is that the free market will cull suboptimal purchasing options from a seller’s inventory, freeing me from the burden of doing any pre-consumption research.  I’ve been given plenty of opportunities to see that isn’t really true, and I don’t blame anyone but myself.

‘Come on, this shit again?’ 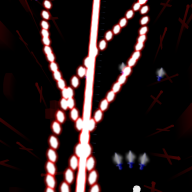 Approaching release of the next and hopefully last scrolling shooter.  It’s long stopped being fun doing these, and I feel like the reason I made this one was, by and large, because I tried to step outside my comfort zone trying to make a larger not-shooter game, and quickly gave up, electing to stick with what I’m familiar with.

My goal is to release by the end of September, regardless of how much left I want to do.  That might not be a good way to go about things, but my passion’s run pretty dry on this.  I haven’t reviewed past entries, but isn’t that how I always feel when it comes to release?  I feel like I’ve written that before.  In fact, looking back, I’ve written something like this every time I get close to finishing something.

Something really odd I noticed last night, the SpriteRenderers I’ve been using on this project have somehow been causing a sizable reduction in performance compared to just using alpha plane models.  I replaced the SpriteRenderer code not 12 hours ago, and it’s gone from 40fps back to 56-60fps on my Samsung S6.  I don’t know what’s going on in SpriteRenderer, but I don’t care anymore.  Maybe something to do with transparency and ordering of the sprites?  Or maybe because in lieu of a provided 3D model, Unity is generating one for it?  Don’t care.

I feel like I should be able to accomplish more given the time it takes to finish these (roughly 5-7 months of lazy on-off work, on average).  I’m thinking of trying Unreal 4, and I’d like to set a Steam release as my next goal.

I very much want to try to make just the basics of a Dark Souls- like game; the character controls, and the boss, being the central components I’d want to implement, in a blank, empty room.  The prompt failures of the attempts I’ve made so far though, make me wary of how much learning I need to tackle before I get anywhere.

Among many other things:

Hitboxes
Should I add them to the model, hide them in game, and test against those?  Seems like the simplest solution to me.  They could be animated within the 3D editor to change size or move around, along with the character/boss model itself’s animations.

Blending Animation
Ideally this could be kept to a minimum.  Beginning an attack would stop all animations and start a new animation.  As would walking, running.  The only blending would be during the transitions between animations.  No attacking while walking/running would keep animations simple.

Equipment
I think each character animation should have an ‘anchor’ bone to where weapons would be attached.  Naturally the weapon itself shouldn’t have animation.. I think?

Strafing
Ugh.  Should there be 8 walking animations (One for each direction) blended between?  I think this sort of thing should have some availability in terms of pre-made assets.  In the end though, I’ll have to do some hand-editing because the attack animations are something I’d probably have no choice but to do myself.

Animation driven movement
I still don’t know how to properly tie movement and animation in a way that isn’t a mess.  I really wish I could attach the movement to the 3D animation itself, but from what I’ve read so far that sounds like a bad idea.  So, what I currently have in mind is, make the animation, then run it in game, fine tuning movement by hand as it plays, until it looks just right?  That doesn’t sound right…

Well, before I do much more thinking I think it’d be best just to focus on the tasks at hand.  Release, then Unreal tutorials.  I’ve also been considering a Masters, but… I don’t know if I want to commit the time when it’s not something I’m crazy about getting.  The only reason I’d get it would be to jot it down on my resume and feel very, very slightly more smug (haha.)

I may run into some trouble, though, with the oncoming release of Persona 5… I don’t know when my copy will arrive, nor whether it’ll actually be usable yet.  I really should be studying for the JLPT 3 too, lofty (sarcasm) of a goal as it is.

Sorry, this post is more whining than I intended originally.  I realize its of no value to anyone but myself, but really… is any of this of any value?  Doubtful.  It’s worrying.  I feel like I’m doing things/signing up for things just for the sake of making ‘progress’, whatever that means, but I don’t feel like I’m actually enjoying much of it.  Maybe this is adulthood?