Fix Enemy Poses
Have a default pose located at the hip, not the foot

Foreground top and bottom should fade to either black or sky

looks nicer when it moves

Am I the only one that hated Nioh? (WIP)

This is coming a little late, given I finished Nioh several weeks ago.  I just felt like writing again.  Actually, I’m not even sure I brought Nioh up when I wrote about Nier: Automata earlier.  Doesn’t matter.

I found my play through incredibly droll.  In the beginning, walking through the English castle, I was excited to have a new action game to enjoy.  The controls felt a little loose to me, but it seemed like a strong formula.  Stamina, light/heavy attacks, dodging, largely one on one/one on 2-3 engagements, individual gear pieces and varied weapons.

The first post-tutorial section was a familiar feeling, getting crushed by peasants repeatedly.  I don’t know why it took me so long to realize the gold Amrita count on the screen was basically souls.  I’m not very clever, and threw those away very often.

Before I get into the complaints, I have to give credit where it’s due.  The breadth and depth afforded by the combat system and weapon types was cool.  Unlocking different skills and working out different combos,  all the while keeping Ki rhythm going, kept using the same weapon type throughout the game from becoming boring.  It’s a far cry from Dark Souls where you really don’t have all that many moves to use.  I only used spears in Nioh, but browsing some of the other weapons’ skill trees gave me weapon envy.  The combat system is great.  Good job team.  I never seriously used low stance as spear, but maybe it’s useful with other weapons.  Can’t really escape the feeling that some attacks aren’t very useful, but it’s forgivable and from a game play standpoint I have no complaints.

I’m not great at writing so instead of trying to feel my way forward on this review I’ll just focus my whining on 3 points, starting with the least bothersome.  Environment, Equipment, Story.

Environment
These might not be fair complaints, but here goes.  Really wasn’t thrilled to have the entire game in basically old-Japan-in-different-weather.  Okay, there were mines, and given the setting is in Japan I can’t seriously expect much else.  But the backdrop never amazed me.  I can’t count the times I just stopped at a cliff in a Souls game or Bloodborne and had to just stand there marveling at the scenery.  Nioh, nope.  It didn’t inspire much in me.

I got incredibly tired of the enemies as well.  Not the bosses.  MOST of the bosses I enjoyed.  But the select-a-player color palette Oni mobs, I’m very much over those.  It really hit home when they set you against 4(?) bosses near the end of the game that you previously beat earlier in the game.  I was dumbfounded.  You’re seriously making me fight this garbage again? Why???  Maybe there was some significance with making me fight those 4 in particular, but it was completely lost on me.  They didn’t even include the snow lady, who incidentally, is best girl.

Equipment
I very rarely felt I had much control over the effectiveness of my equipment.  I just had what I had.  I level matched a handful of times, and I also reforged things to minimal effect.  Refashioned a couple of times, but that’s a little pointless when I don’t really like any of the armors beyond the plate armor set.

Story
Now here, is where I can’t bring myself to say, ‘the positives outweigh the negatives.’  Not finding environment and equipment appealing could be forgivable if I was gripped by the story, but at no point did I feel any motivation beyond, “Jesus christ let’s just get this over with holy shit I don’t want to play this anymore.”

All of the above characters, I feel like, given their involvement in the story, I should feel connected to them, but I don’t.  Maybe I missed some miss-able event, but I wasn’t really given a reason to care about any of these guys.  Okatsu never being recognized by her father was very mildly ‘sad,’ but we never do anything about it, and it’s never resolved.  There’s just no reason to care.

Kelley, and NOBUNAGA.  WOW that was disappointing.  This was such a kick in the ass.  Kelley spends an inordinate amount of time to get to the point of resurrecting this icon of might as an evil demon.  He comes back to the living.  We have a completely forgettable mob-tier fight with him.  Then he just fucks off, in an explosively anti-climactic instant.  I don’t mean to sound emotional but wow this game is a piece of shit.

As if that wasn’t enough, Kelley then turns into the biggest adversary in the game, and it’s a fucking snooze-fest as well.  There weren’t all that many bosses I beat first try, but Nobunaga and Snake party man were two of them.  What an absolute waste of a conclusion.

Conclusion
When it’s a game I enjoy, I don’t spoil myself on anything until after it’s over.  In this case though, my enjoyment levels were so non-existent that I didn’t even care enough to look up what I missed after I finished.  Maybe there were some choices in game that I hadn’t realized.  Maybe I got the bad ending.  Maybe the missions after the credits roll are where the real satisfaction lies.  Nier was like that, after all.  But when my play through was spent hoping desperately that the game would finally be over so I never had to look at it again, there’s no way I’d go back for more missions after the credits.  0/10 would not play again.

Okay, if I truly got no enjoyment out of it, why on earth did I continue to the end?

On a mechanical level, I enjoyed it.  I like dodging and poking things.  That’s it.

Today I Learned: How Not To Die On A Bike

Drove my bike down my path to work for the first time, in the middle of the night.  Another first was having a whole trip where I didn’t stall out.  Slow progress. 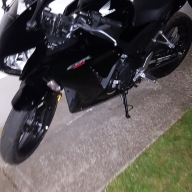 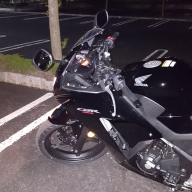 The exit I usually take back home off Garden State Parkway was closed for construction tonight, and I got somewhat lost…

I tried following some signs for my home town but somehow ended up in some shady looking community.  That was a pretty awful feeling, and I just kept going straight until finally I saw some signs for a familiar highway.

I’ve always found it scary going through unfamiliar roads but it was much worse on a bike for me.  On top of not knowing what intersections to expect ahead, I just feel vulnerable without car doors surrounding me.

The things I specifically tried today were rev-matching downshifts and reliably setting off from a stand still.  I also ran into what I’m pretty sure was a pressure-driven traffic light.  Had to make a left turn through a red light.  First time for everything?

Edit Reviewing my memory, I realized I was wrong; I DID stall out last night, but I thought it was somewhat forgivable so I forgot it.  I was at a light on a hill and my visor was open a crack (I had opened it earlier because it started fogging up).  I wanted to close it, and I started to use my right hand, releasing the brake.  I began rolling, so I switched hands knowing that releasing the clutch there would kill the engine.  In retrospect I could have just used the rear brake and let go of the front brake…