Today I Learned: How Not To Die On A Bike Part II

Okay, I think I normally keep the amount of swearing down here, but I think I need to make an exception.  Don’t FUCKING drive the bike in the rain.  Maybe other people can handle it.  I definitely fucking can’t. 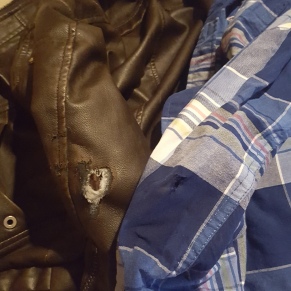 Above is the damage to the bike, damage to my clothing, and the location.  All in all, it was a pretty tame first crash, I think.  I was going maybe 35 MPH around the bend, leaned a little too far I guess, and had a low side bike drop.  It almost went across a divider with a more active stream of cars.  My bike was lying around the corner so I was pretty terrified someone would come barreling down the bend and just end my existence.

It was a left turn, so the bike should have slid along it’s left side, but I’m not all that sure what happened.  I don’t even remember the bike’s orientation on the ground when I picked it up.  It’s funny how stress makes you feel much stronger, usually I can’t pull the bike up, I have to push it up, but here I just yanked it off the ground like I was going to die.  In fairness I believed I could have.

The left foot peg is bent upward, and something has bent into the path of the gear shift very slightly.  It’s still usable though.  Then there’s that huge dent on the top right of the fuel tank.  Both mirrors were folded all the way in, so I think the bike was face down on the left, then right side… somehow.  Maybe it flipped over something.

As soon as I felt the bike lose grip I felt just resigned.  I don’t think there was much time to panic coherently.  I saw the sparks flying, and didn’t form a thought until I stopped.  That’s when the fear of getting hit shot through me; the pain of the crash itself was very minor.  I almost considered just wearing a shirt today.  I ended up with some scrapes that didn’t even draw blood.

A valuable lesson.  I’m glad the biggest cost I have to worry about is the repairs, not limbs.  I’d like to imagine my dog missed me more than usual but he’s just always like that.

I tried to start the bike again as soon as I got to the sidewalk, but it wouldn’t start and I figured it was just inoperable.  I also tried to get it into neutral but thought the gear shift was busted, so I just walked it for maybe 50 yards with the clutch in.

Eventually I realized that neither the did the gear shift break nor was the bike un-start-able.  The quick engine kill button was just engaged.  Drove the rest of the way home.  The clutch felt a little loose, and there was some fluid leaking from a small tube from the bottom immediately after the crash.

Driving it around again without a proper check would be unwise