Today I Learned: How to run Web Service Project in IIS Express

One thing I really hate is getting stuck on something and googling for a solution, and getting pages upon pages of solutions for problems that aren’t mine.  Not saying it should be different, but it does tend to get me upset.

I have a web service that I need to test, and I want to do that without locking up Visual Studio.

I right clicked the solution, hit Publish.  Selected IIS, FTP, etc option, selected File System from the Publish Method drop down, and put it in a shallow folder in C:\.

Ran iisexpress and gave it the path of the folder I indicated in the previous step.

Started up my test application which makes requests to the URL.

Worked just fine.  This probably shouldn’t have taken up 2 hours of my time…

How Not To Die On A Bike Part III

It hasn’t even been a year but I can already say, it hasn’t been great.

Screw fell out of the gear shift and foot peg base during my ride to work. Couldn’t upshift, because the whole assembly just swiveled on the one remaining screw instead of holding so it would apply pressure to the gear change fork.

I was starting from a stop at a 4 way stop intersection, followed by a couple cars.  I revved up to gear 2 quickly, and then tried for gear 3 when I noticed the revs were way higher than I expected, and I was still going nowhere.  I thought I was in neutral at first, but I checked the lamp and that wasn’t the case.  I pulled over, confused, into some rich guy’s driveway.  Looked down, moved the gear shift lever, and saw the whole assembly just swinging around when I tried to move the lever up.

I was at a loss for what to do at that moment, naturally.  My first conclusion was to walk around and look for the screw.  There was no sidewalk on that road so it was a little awkward stomping on everyone’s grass, but I’m sure they could afford replacement lawns.  Distances are a lot longer on foot than they seem when sitting on wheels, but I went back to the intersection, and returned to my bike without seeing anything bolt-like.  I considered getting an Uber back home for replacement parts (which would have been terrible because I didn’t actually have the replacements I thought I had), but then decided the problem wasn’t that big.  “Why not try to figure something out here? I don’t want to leave the bike here, and I definitely don’t want to ring these guys’ doorbell to explain why there’s a shitty bike blocking their driveway.”

Something to fasten this gear shift base in place…

At first I tried just tying a loop around the loose parts, with a blue lanyard I had in my backpack.  It wasn’t tight enough to keep the shifter in place, though.  I then looked for some wire to thread through the screw hole to see if I could tie a knot through there, but I was a little reluctant because I would a. ruin whatever I put through there, and b. any wire or string that would fit through that hole easily may not be sturdy enough to not exhibit structural failure.

The only long metal ‘thing’ I had was an Allen wrench that was used for most of the fairing fasteners.  I stuck it through, and tied that to the frame.  It held long enough to get to work. 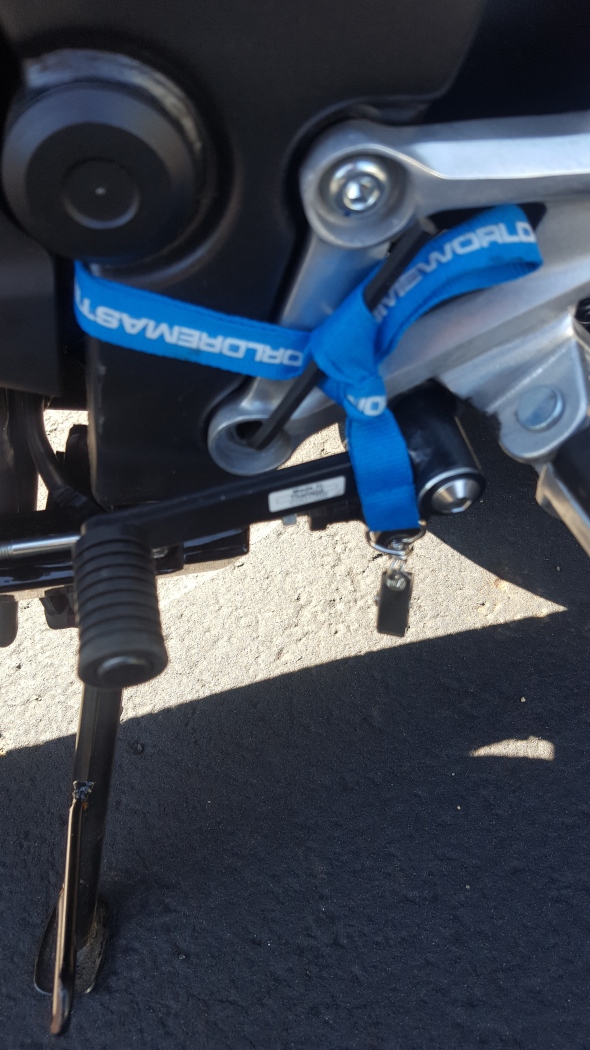 Biking is pretty shit.  I’ve ordered replacement screws and some blue loctite.  Thinking back, I probably could have just gotten around this problem by putting more downward pressure on my heel when upshifting. I tend to lift my whole foot when working the lever though, because I’m bad and I don’t like stretching my calves.